What is Tai Chi?

Tai chi, it’s full name being ‘tai chi chuan’, is a captivating Chinese art, promoting health and vitality, which consists of a progression of relaxed graceful fluid movements. An identifiable feature of all styles of tai chi chuan  is that the movements are performed slowly and flow from one into the next without pause. The subtlety of the exercises is found in the slowness of the peaceful movements co-ordinated with the breath, promoting inner calmness, balance, co-ordination and vitality.

It has become well known in the West as a very effective health exercise, but tai chi chuan  is quite different from other forms of workout as it benefits the practitioner without the strenuous physical demands on the body required by other sports. 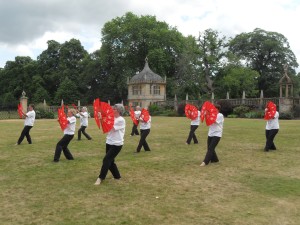 Approximately 70% of all doctors’ visits for modern complaints have the onset of the problem caused by stress factors, or blocked energy, in today’s frantic life. There are two ways energy gets blocked, either through an accident such as a broken limb or through internal unmanaged stress. Tai chi and qigong help us find our flow of life energy through the use of breathing and relaxed slow movements, we enable the mind, body and spirit to let go of tension or ‘dis-ease'(lack of harmony) before it becomes a disease.

– Help reduce stress by promoting a sense of calm and well being,

What to expect at first session:

New beginners are always welcomed to join any time in the year. New beginners receive a 15% discount off their first term fee when they join (or what is left of the term if starting later than at the start of a term). Terms are generally 12 weeks and sessions run during Somerset school terms times, taking breaks at half-term and holidays.

We are a keen and friendly group; some students have been coming for many years because they have realised the benefits they experience from practising tai chi.

* Warm up exercises: this section of the session stretches, wakes up and opens the body and students are encourage to practise at their own flexibility and depth.

* Qigong (also spelt chi-kung) exercise: qigong means ‘energy work’, so qigong exercise are gentle energising flowing movements co-ordinated with the breath which increase and maintain our levels of chi energy within the body. ‘Chi’ is the fundamental force in the universe – air, breath and nourishment. All things would be lifeless and static without chi. Chi is the driving force of the universe and human life.

Breathing is the key to releasing the ‘world we all carry on our shoulders’, and so we encourage learners to come to sessions for no other reason than to ‘breathe’ and to ‘let go of their grip on the rat race from today’s frantic life style’ and then one day they will discover that they have grasped tai chi and qigong naturally without any struggle.