Qigong is the name given to exercises and meditations, which use and direct flow of Qi energy in the body.

Just like tai chi, qigong originates from China and is an ancient form of exercise for health and vitality, having attributes of both tai chi and yoga. In fact, some people call it Chinese yoga.

It as been passed down through the generations and is closely linked to Traditional Chinese Medicine (TCM). Although still not very well known in the west it is practised by millions of people all over the world.

Qigong is a discipline that exercises the mind, and combines breathing, posture, movement, stretching and meditation to promote mental and physical health, vitality, flexibility and stamina.

It helps fight stress, increase blood circulation in the body, improve flexibility of the muscles, ligaments and tendons, boost our immune system and energy levels, developing a sense of calm and equilibrium. If practised regularly, it is effective in preventing illness.

Qigong/chi-kung covered in our club:

Other Qigong routines practised in our club:

Static postures to build up Qi:

Qigong is used as a healing therapy and regulates the body’s energies in order to prevent, postpone, reduce or even sometimes eliminate suffering caused by disease.

Scientists are now studying qigong and they have noticed that regular practice helps reduce stress and promotes a sense of calm and improves health, vitality in body, mind and spirit.

It also helps practitioners with health conditions such as hypertension, arthritis, rheumatism, headaches, migraines, insomnia, asthma, diabetes and ME.

What to expect at first session:

*New beginners are always welcomed to join at any time in the year.

*We are a keen and friendly group; some students have been coming for many years because they have realised the benefits they experience from practising qigong and tai chi.

*Class sessions are paid by term and cost £7 per session. New beginners receive a 15% discount off their first term fee when they join (or what is left of the term if starting later than at the start of a term).

*There is also a yearly membership fee of £21 payable to the Longfei Taijiquan Association of Great Britain to which we are affiliated with, which gives you personal insurance cover with the BCCMA (British Council for Chinese Martial Arts)

What is “Daoyin Yang Sheng Gong“:

Professor Zhang Guangde was born in 1932, and from 1955 studied at Beijing Sports University, where he progressed over the years from being a student to becoming a Senior Professor at the University.

In 1974 he was diagnosed with serious health issues and he undertook deep studies of Traditional Chinese Medicines (TCM), Daoyin ancient body and mind unity exercises, and tai chi. He then developed a new style combining of Daoyin qigongcovering physical exercise, mental cultivation and TCM principles which he called Dao Yin Yang Sheng Gong, and he overcame his own illness with it’s regular practice.

In China his method of Dao Yin Yang Sheng Gong is officially recognised by the Ministry of Health and incorporated into the nation’s fitness programme, as well as used in hospitals and sanatoria, offering hope to thousands of patients suffering from a wide range of medical conditions.

What is “Chinese Health Qigong”:

They are redeveloped and updated ancient sets of Chinese qigong exercises by Chinese professors of qigong, TCM and sports. In 2002 the first four sets were introduced all over China, and since then spreading all over the world.

The first four sets to be developed are:

Shibashi simply means ’18 movements’ in Chinese, and consist of 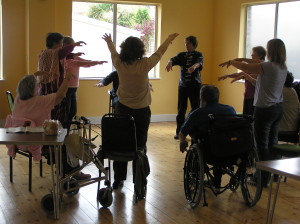 Tai Chi classes all have qigong as part of their curriculum and the Shibashi first and second routines are part of the qigong practised in the club’s tai chi and qigong classes.

When fifteen, he began studying with a Southern Shaolin monk.

In 1979, Lin Housheng combined elements of qigong and, modified and simplified Yang style tai chi to create his first set of eighteen movements.

The second set was created in 1988, based with elements from Chen style tai chi and tai chi sword. (Other sets were later created in the 1990’s and in the new century).

In 1989 Lin Housheng came to the United States to participate in a research project at the University of San Diego. In 2010, he became a United States citizen.